[Watch] Behind the Scenes of “Personal Space”

Back in December Paste Magazine was so kind enough to release our new video for “The Telegenic Split”.  A lo-fi video set in the future (or is it?!), where father Bonz has to protect his family (played by the real Bonz’s), from impending doom and drones strikes in his Bay Ridge Neighborhood. Donning a perfectly legit NASA certified astronaut suit, we watch Astro man fight off these drone strikes, check digital vitals in his arm, and do whatever he has to do to protect his family and newborn. Watch below as things get real dark and worrisome!

This is one of the singles off Brian Bonz’s latest album “Misophonia” , which if you haven’t picked up yet, please do! It’s also on beautiful vinyl. We thought it was really interesting to choose to do a video for this one cause it wasn’t the obvious one. We wanted to branch out from our usual comfort zone.

I put an ad on craigslist for a prop guy and sci-fi suits.. I was shocked Matt from Animatronic Bear touched base with me. I was also talking to various prop houses but Matt had the right fit and the best Astronaut costume. – Bonz

We have been working on this one since Bonz’s child was born, so essentially it’s our version of Boyhood but without all the awards! You may know our dude Lee from Texting and Walking and Line Cutters, he’s been working his way into a lot of our videos and has been increasing our cute factor. Also joined the get down is our good friend Ricky, the third crew member from our Subway Etiquette video, which fun fact… Ricky consumed so much copper that he almost had to go to the hospital.

We had a good crew, Ricky almost lost his life playing the silver evil villain.. the suit was made out of cooper and not connected to oxygen tank.. his teeth began to hurt him and feel funny – Bonz

We decided to play with time on the birth of my son to watch him grow to become a toddler to mess with staying indoors vs reality when life sucks outside. – Bonz

There’s a lot of lasers and explosions in this video, and be warned, the ending might disturb you. Overall, we feel it’s kind of like Independence Day with only .002 % of the budget. 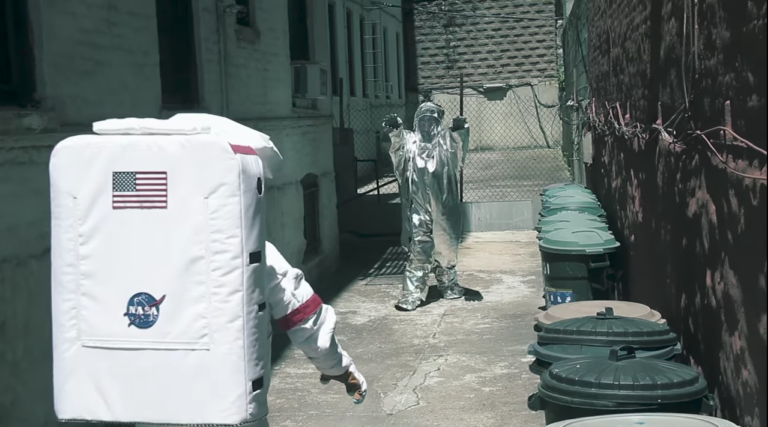 The Bonz family look on

I am so happy Paste picked up the video to premiere it. It’s tough to get any press these days.. especially if you eat bagels like me. – Bonz