[Watch] You Will Want To Do Roller Skating Splits After This 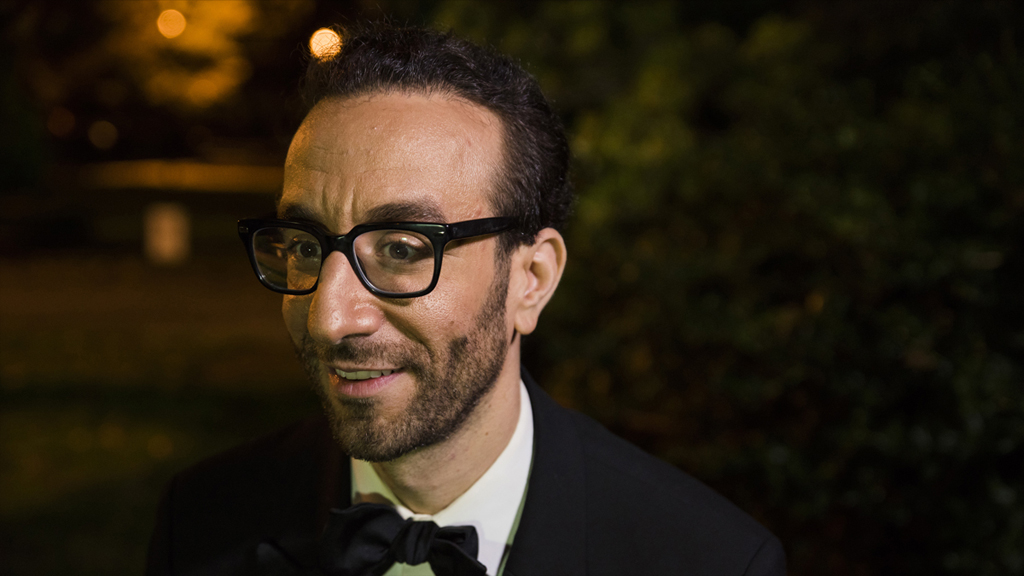 Photographer and filmmaker Dennis Cahlo releases trailer for new short film “Death and Disco Fries” and we’re super excited about it. We’ve been tracking this   magical man ever since his Indie band The Realistics, and currently has been making a big splash in the photo and film world. This film tells the sweet, funny, and touching story of Charlie who…well…he died. And now he’s got a chance to make good on a past regret.

Death and Disco Fries has been making it’s rounds in the festival scene and was officially selected in over 20 festivals, also taking home Best Director at Comicpalooza Film Festival. This is Dennis’s second short film which now makes him a decked out actor as well. We really enjoy watching Dennis’s films and progress over the past years and excited to see what he’s cooking up next. His writing is really sharp and has an ability to get great performances from talent, leaving lots of thought-provoking material to his audience. His last film “The Weekend” is streaming for free on Amazon Prime and recently got distribution through Shorts TV.

We have a lot of built up questions for Dennis. We cornered him one afternoon in Industry City while wearing straw hats and made him write shit down for us. It worked!

Bobo: Interesting story! how did you come up with this?

Dennis: Thanks so much! It all started with CJ Cullen, the actor who plays Mr. O’Halloran. I knew I wanted to write a role for him and I had this idea of two guys in a diner. I went through a ton of scenarios and they had all been done before. So really, I was forced into a super creative corner and had to come up with a narrative theme that was completely original. It dawned on me that death could be a great comedic vessel, especially because I was able to write in some absurd situations that wouldn’t really make sense in a normal storyline. I own the phone that Charlie gets rung up on at the beginning of the film and I was staring at it one day and the whole story came to me in a flash. It was divine intervention through inanimate object.

The opening feels a bit Tarantino-esque, who are some of your influences as a filmmaker?

Dennis: What a compliment. I’ve never even noticed that it was Tarantino-esque up until now. I’m heavily influenced by Italian and French New Wave directors (Antonioni, Godard, Truffaut). On the American side of things Woody Allen is a tremendous influence. And I realize how that could trigger some ill feelings in a lot of people in our current climate but “Annie Hall” remains one of my favorite films of all time. But the filmmaker that has had the most tremendous influence on me is Stanley Kubrick.

How many disco fries did you actually eat while filming? Do you naturally have a love for them? Fries also makes an appearance in your film “The Weekend”.

Dennis: Funny story about those fries…I actually am vegan in real life and had to substitute the cheese with fake vegan cheese. Let me tell you something, it’s disgusting. Hands down the worst idea in the history of the culinary arts was to try to make cheese for vegans. I ate a lot of that plate and had to pretend I loved eating the equivalent of what tasted like an old gym sock. I almost threw up afterward.

Why I chose Disco Fries was because in Staten Island (where I was born and raised) they were a late night delicacy in my youth. After a heavy night of (fill in the black with whatever illegal things one ingested in their formidable experimental years here) we would all sojourn to The Golden Dove or Mike’s Place and order like five plates of the stuff. It was my comfort food and also something that I felt was the PERFECT last meal for Charlie before he was off to the great beyond.

You’re the second person to mention that fries are included in The Weekend as well! I think I now have to make it a thing. Every film will now have fries in it.

Is this autobiographical in any way? Like you have a “cat wife” right??

Dennis: There are definitely elements of my life in there. The opening scene, although super funny, I wrote during a time of feeling intensely isolated. As a writer I punched it up and wrote Charlie’s backstory as a guy who has been a computer programmer from a very young age. An on the spectrum genius who made a ton of money but has no social skills and rarely goes out. I feel like everyone who writes is writing from their own life. Especially if the situations are really funny or can be used as some kind of vehicle to punch up a story.

The cat thing…yeah…that’s true. Although all my cats are dead. Hopefully they’re hanging out with Marilyn Monroe eating disco fries in the afterlife!

I also LOVE Marilyn Monroe and honestly, if there is an afterlife, I would want to hang out with her and make movies.

Angel of Death guy, we feel like we know him personally — the on-screen chemistry between you two is really nice. Where did you find him?

Dennis: CJ, who I mentioned at the top of the interview, is a magical human from New Jersey. We met while I was on the festival circuit for The Weekend. I saw him perform a sketch at “Hang On To Your Shorts” a festival he hosts in Asbury Park and once I saw him perform I knew I had to write him something. He’s a real hit at festivals. Everyone LOVES his character. Honestly, I was hoping he stole the show. I wanted him to. He’s such a great everyman and has this old school comedic delivery and look to him that is a joy to see on the screen. I can write parts for him for days.

He’s also so loyal to the film and is always coming to the screenings. He’s just a gem of a man.

Seems like this film went over really well in the festival scene! What was some of the best comments you received so far?

Dennis: So far it’s been a crazy run! I had no idea people would react so well to the film. We’ve made it to 22 film festivals right now and hopefully we’ll get into a few more. Audience reaction is the BEST. The laughs are so wonderful to hear when we are at a screening and we always get an emotional reaction toward the end of the film because it takes such a touching turn. No one sees it coming. Everyone always thinks it’s going to be a laugh out loud comedy the whole time but once we hit that ending, the sniffles in the crowd are audible. In California I heard a woman gasp and say “Oh My God” very gently right at the moment Charlie makes good on his past regret.

When can we expect the full film to be released and where are you hoping to take it?

Dennis: The film will be officially released in 2019. There are already a few distributors interested in it but I can’t really talk about it too much until it’s a done deal.

CJ and I have bounced around the idea of making it into a series where Charlie becomes Mr. O’Halloran’s apprentice and has to take his place bringing people into the afterlife. Every week can be something really special. I’m developing the idea everyday but I’ve got some very funny situations and ones that are so absolutely heart breaking I wonder if it’s too much for audiences to handle. But that’s what I love about the idea of it being a series. I even wrote down a character named “St. Theresa” but she’s not THE St.Theresa. She’s actually St. Theresa Stagliano Of Bay Ridge.

We’ve been following your past music projects ever since The Realistics, DC and The Change etc… Was making the move into filmmaking easy? We still have a lot of love for the song “All the Dreams That Died”

Dennis: Oh wow that’s so nice to hear! I still love music and love writing and recording. I do it as a hobby now. And yes, making the transition was completely natural. There’s so much similarity in the way rhythm is used in music as compared to in editing and storytelling. I’m convinced musicians make really great editors. We just know how and when to get to a crescendo and how to bring it back to a quiet lull without awkward gaps.

You’re also killing it as a photographer, do you ever find it tough to juggle between multiple creative endeavors?

Dennis: I am unbelievably grateful that I pushed hard to make a living from photography which eventually led to filmmaking. Juggling multiple businesses is a balance as everything in life is. I see it as being a CEO but of myself. I finally make enough per shoot and video sessions to build in a budget for assistants. And that was after 6 years of busting my ass by myself. Everything entrepreneurial is a process and has so many levels. You just have to know when the right time to start bringing in help is and charging appropriately for it. I also sacrifice a lot. I don’t have a family by choice and I refuse to get any pets until I can dedicate the appropriate time to nurturing both of those aspects of life. Right now it’s all about building and you can’t build something unless there’s a laser focus. At least for me that’s how it is. I see some of my friends who are able to balance a dog, a family, and a business all at once and I could not even imagine that amount of work. I give those folks a lot of credit and have an unbelievable amount of admiration for them.

What’s the next project for you?

Dennis: I’m finally writing my first feature “Molly and Jim”. It’s such a funny, wonderful story and I am super proud of it. Plus I’m writing in mind of doing it on a micro budget with a crew of about six people. I had all these ideas but they all needed big or mid sized budgets. So I scaled back and thought long and hard at what I can shoot with the equipment I have and “Molly and Jim” came flying out of me. I’m super excited to start working on it.

We hear your exquisite at men’s fashion, can you ever style us one day to make us look extra MINT?

Dennis: I can get you guys EXTRA EXTRA MINT. Century 21 Man Date soon.

Has anyone ever told you, you sound like Ed Norton?

Here’s some sweet stills of the making of and Dennis looking nice and dapper.
[AFG_gallery id=’2′]