New Album “California Pop Music” Will Be On Repeat Forever

[Podcast] PBR Podcast: Where Dreams Surface and Dudes Bond in a Basement

Don Paris Schlotman Serenades a Hostel with an Acoustic Set

Our good friend Don Paris Schlotman, of Sky Captains of Industry, played an intimate acoustic set last night at The Local NYC, which is a cozy hostel in Long Island City and very fitting for Don since he is leaving to Japan on a music tour in September. This will be his last domestic set before he leaves, so it was only right to see him off with drinks, a camera and a bunch of German dudes. 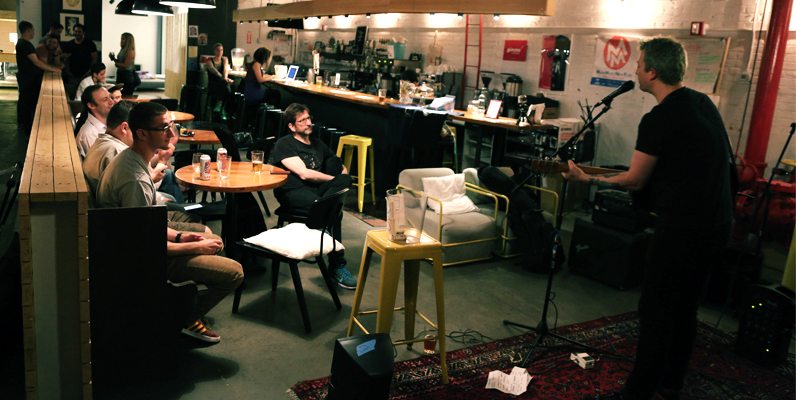 Don, a Poughkeepsie native, has a great voice and is just perfect to listen to after a long day of work. One of his songs is inspired by his favorite scientist Dr. Ian Malcolm from Jurassic Park, he tells Bobo Touch. We met Don back in the day, while Brian Bonz was running sound, schlepping cables and doing the Butterlump Braun gesture. Now they both play together and it’s safe to say some funny feelings ensued.

I went to see his band for the first time and was blown the fuck away. I’m playing bass and synth for Brian and I am stupidly pumped about it, I probably have wood right now – Don

Don plays bass and is the co-founder of the Sky Captains of Industry, a sci-fi futuristic post-apocolytpic rock band and is playing this Saturday at the Way Station at 11pm in Brooklyn. If you have no interest in music, you can always go and ask Don for advice on how to talk your way out of being mugged. Allegedly he escaped a robber once. #NeverLieTillWeDie