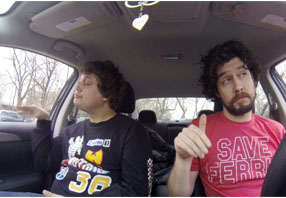 Brian Bonz and Mike Rizzo are lifelong friends born and raised in Bay Ridge Brooklyn. From a young age they developed a brand of comedy of their own. Growing up in the grunge era, they emulated bands like Nirvana, Deftones, Bjork, and somehow found themselves making Limp Bizkit parody music videos.

Bonz was heckled for looking like one of the Hanson brothers, and Rizzo was elongated and had a weird skateboard stance. They had a man crush on Brandon Lee and did a shot-for-shot remake of “The Crow” at age 13, though the tapes are still missing somewhere in Tall Timbers New Jersey.

Through Bonz’s extensive music writing and Rizzo’s vast film sensibilities, they started shooting odd ball comedic shorts and making music. Rizzo played drums on Bonz’s album “From Sumi to Japan”. They were known to everybody in their building as “the kids with cameras and guitars”. 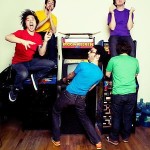 They teamed up with Bonz’s brother Mike Strandberg, Rizzo’s brother Jay Liquori and good friend Denny Mui, where together they conceived ideas and started doing sketch comedy videos. After realizing their potential and getting a local buzz, they started the film collective “Paxen Films”. They did music videos such as Kevin Devine’s “Brooklyn Boy”, Pablo’s “Loser Crew”, shot live concert events for Paul Van Dyk and got great notice when they released the “Chinese Food Song” which featured Jesse Lacey (Brand New) and Kevin Devine in an unexplainable cameo that left fans wanting more. This was the birth of Bonz and Rizz’s fun PSA videos.

Bonz and Rizz are now focusing on tips for the counterculture. Whether it be subway train etiquette, holiday safety messages or something as simple as “don’t forget to put on your deodorant”, they got you covered.

It’s like when your Gramps gives you advice – it may be good advice but it’s coming from Grandpa so you basically blow it off. Bonz and Rizz are not your grandpa, so if they say some good shit in a fun way – maybe you’ll listen and your life will be a little better, or longer or funner or whatever. That’s why they do it, to maybe make a difference & have fun doing it, and the chicks dig it.