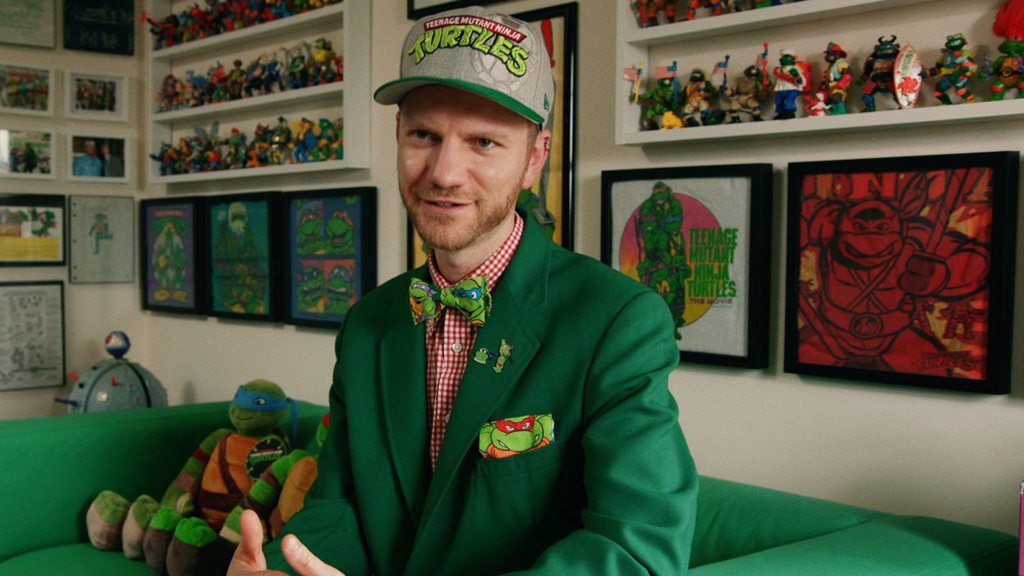 Yippie! It’s been one year since we released Welcome to the Sewer Den, our epic TMNT nostalgia short film, following the Ninja Turtle super fan Jonathan Zelenak and holy sh*t so much has gone on in the world since then.

But what has been a positive is seeing the continuing outpour of love and comments for our little movie. So many Teenage Mutant Ninja Turtles fans and collectors seem to really respond well to it, even the official green dudes giving us a cowabunga.

the Turtle Power is unreal https://t.co/M8tZxJYh1w

To commemorate the anniversary we asked the Sewer Den himself some powerful follow up questions. We went to extreme measures to find him in New Jersey, but low and behold he was in a sewer (duh!).

Bobo: How do you feel about the movie one year later?
Jonathan: I’m really proud. We made something truly unique, offbeat & interesting. The response has been overwhelmingly positive with accolades from every corner of the cowabunga community. People shout “Turtle Power!” everywhere I go! Sadly in 2020, I didn’t go many places so I didn’t hear it too often. But those first months of 2020 I felt alive.

I only wish my son could be in the movie! He was born just a few weeks after the film’s release. A stork dropped him off in a pizza box.

What’s your favorite comment you’ve received so far?
“His poor parents. Zero reason they should be burdened with his hoarding. He’s a grown man, why not keep his junk with him?” A year later and this is still the best reaction to the film. Just a random comment on YouTube, but I want to sit down with this person over a slice of pizza, a brewski & let them unload their mind. Maybe bring my parents too.

Any decisions on burning it down or doing an AirBnB?
October 27, 2063. Mark your calendars. My 80th birthday. Plan is to still burn the collection to the ground. Pizza will be served.

BUT if we can kick COVID from the world, I’d still love to make this place available for other fans to enjoy. Everyone deserves a night in Ninja Turtles bed sheets & a bunk bed.

Can we do a feature film on just your parents?
They’re camera-ready… still sitting in the same seats yelling into the void, “where is my Bobo Touch?!”

Do you think now as a dad you will carry the tradition of filming your kids on a VHS camera?
V-H-YES. I’m going to wait until he can say “cowabunga” though. But good news! He likes pizza so we’re off to a good start. And if my wife and I can have 3 more boys, we’ll be set to go as the Turtles for Halloween. Life goals, am I right? Definitely will need that VHS camera.

Watch our short if you haven’t!