Basic Shapes Is So Hot Right Now: Tonight At Pianos

New EP by Les Vinyl and Q&A with Casey Jost 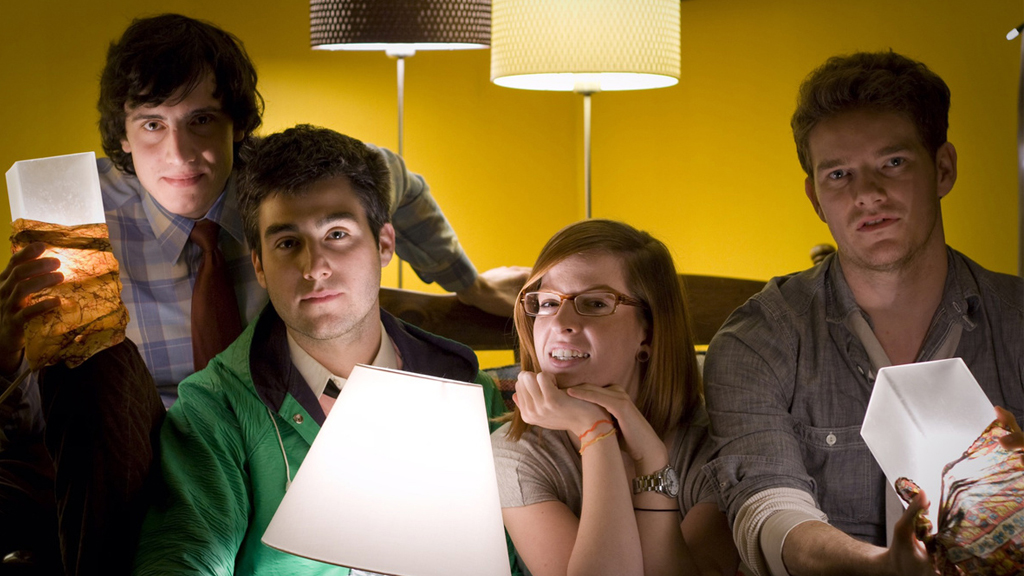 Our friends just dropped a new EP yesterday and it’s fantastic. This New EP by Les Vinyl entitled “Sick Fade” brightens up our lives. Also dropped is a beautifully done cover of “XO” by Beyoncé, makes us want to run down to the Eldorado and do some weird hand gestures. Les Vinyl is a fuzzy rock-pop band from Staten Island consisting of Casey Jost, Jenny Miller, Carlo and Pat Given, who are lifelong friends. Over the years they were all involved in different projects, but this one is pretty unique. Recorded at Red Room Studios, the only question we have is how do we get the Queen Bey to hear this cover?!

“Their music — I can’t explain it — it makes you smile.” – Ingrid Michaelson, Singer/Songwriter

We interviewed songwriter/front man Casey Jost, to get the full deal on this EP. We knew he was our primetime guy after this here moment.

Bobotouch: Tell us about this EP. What’s it all about?

CJ: This EP is the story of a girl. Who cried a river and drown the whole world. No. It’s just songs. 5 songs (plus a Beyoncé cover we had to release separately so we don’t get sued). They all sound pretty disparate but I think they all work together nicely. The title came about from a conversation about what we should name the album — and someone was like, “What if we name it Sick Fade?” And then we laughed. And then we kept it. “Sick Fade” is a thing that cliché Staten Island bros say. But there’s something about the two words that sound nice together. Like “Rubber Soul” or “Christmas Ham”. I dunno.

Bobotouch: You go way back with your band members, tell us about the writing process with them and the collaboration?

CJ: I definitely start all the songs. As time progressed, I do a lot of the writing on my own before bringing it to the band. But once I do, that’s when the song takes it’s real shape. The band adds so much color. What I bring to them is either a doodle or a sketch, and the band fills in the rest. They question the structure, add bridges, sing harmonies — all the good stuff comes once I bring them the tunes. In fact, the song Questions was supposed to be sung by me, but we decided Jenny should do it. AND the guitar solo on the track was performed by our humble bassist Carlo!

Bobotouch: You guys definitely have a signature 90’s sound, love it. What are some of your techniques to achieve this sound?

CJ: It’s just the way it comes out, maaaan. Those 90s tones are what we navigate towards naturally. I really just want to write early Weezer songs, but sometimes other bands like Pavement or The Pixies or They Might Be Giants just jump into the songs somehow.

Bobotouch: Any music videos in the works, and if so for what song? plug it baby.

CJ: YES! We are coordinating music videos for a few of the songs! I think I have one idea for every song – but probably not enough time to film them all. We’ll have a bunch of guest directors as well. (Hopefully, I can get Baby Bay Rizz on board for one!!!)

Bobotouch: Casey, you are a busy man. You are a touring comedian, you act in short films & TV and also a writer for Impractical Jokers…how do you find time for music?

CJ: Yes, I am busy, but I really like to keep busy. Especially my mind. And sitting with a guitar and writing songs is much better for me than sitting in front of a TV or computer — especially since my JOB is to make stuff for TVs and computers! Writing the songs is the easy part – scheduling when we’re going to rehearse and record – that’s when ‘the busy’ gets in the way. But passion makes it happen.

Bobotouch: What’s next for Les Vinyl?

CJ: Another EP. We want to do less songs MORE often. Rather than take long breaks in between recording sessions, we want to get into the studio and put out more. We’ve become a band that records and doesn’t play live much. Les Vinyl is me, a teacher, a guidance counselor, and a fireman. But we want to continue making music and recording is a great way to do that.

Bobotouch: Beyoncé cover, yes. We much prefer a Beyoncé song like this. There’s a lot of beautiful tones in here. Why this song?

CJ: ALL JENNY! This was 100% her idea. I asked her the question and she said this:

“I kind of felt like if Les Vinyl and Beyoncé were best friends, this is the song they would write together.”

If you are into wielding swords and cutting through a table of bananas, please check out their last video directed by Geoff Celis.

And also check out this live version of “Legless”